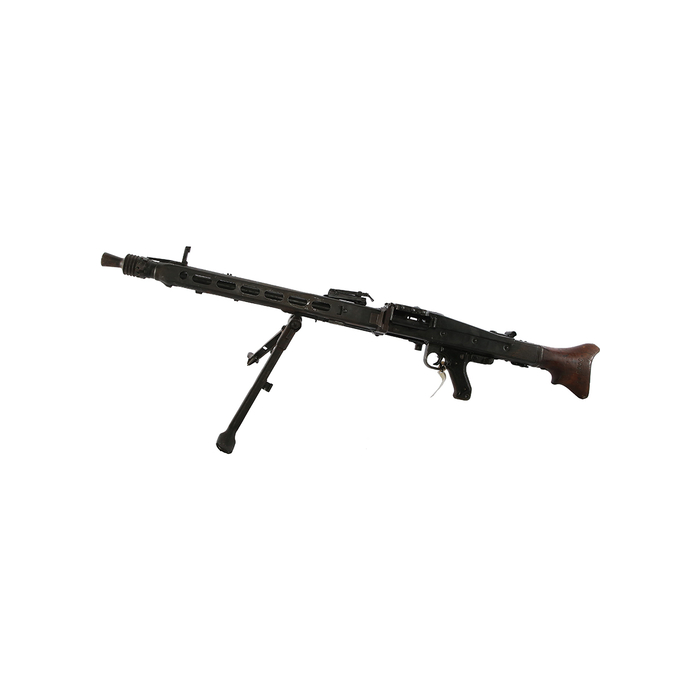 The MG-42 was a submachine gun designed in Nazi Germany and widely used by the Waffen-SS and Wehrmacht until the end of the war, It is a German multi-purpose machine gun that was developed and introduced into service in the Wehrmacht “Defense Force” of Nazi Germany and subsequently adopted as a standard general-purpose machine gun for all branches of the German Armed Forces. This weapon had a bad reputation among the soldiers of the coalition forces, who had to confront this terrible weapon, as it had a devastating effect on morale. The soldiers were psychologically shocked when they heard the sound of shooting with this machine gun, which they are not accustomed to. Its rate of fire can reach in some versions of 1200 – 1600 rounds per minute, so their ears did not distinguish the sounds of the gunshots, but rather a loud sound similar to the sound of tearing cloth or an electric saw, and for this reason, it was called by the soldiers the bone saw, Hitler’s saw, and the ramming saw. This forced the leaders of the coalition armies to show the soldiers recordings of shooting with this machine gun to mitigate the impact of the shock before sending them to the fronts. The weapon was officially accepted, and the main manufacturing of the production design began in 1942, as the MG 42, contracts going to Großfuß, Mauser-Werke, Gustloff-Werke and others. Production during the war amounted to over 400,000 units (17,915 units in 1942, 116,725 in 1943, 211,806 in 1944, and 61,877 in 1945)